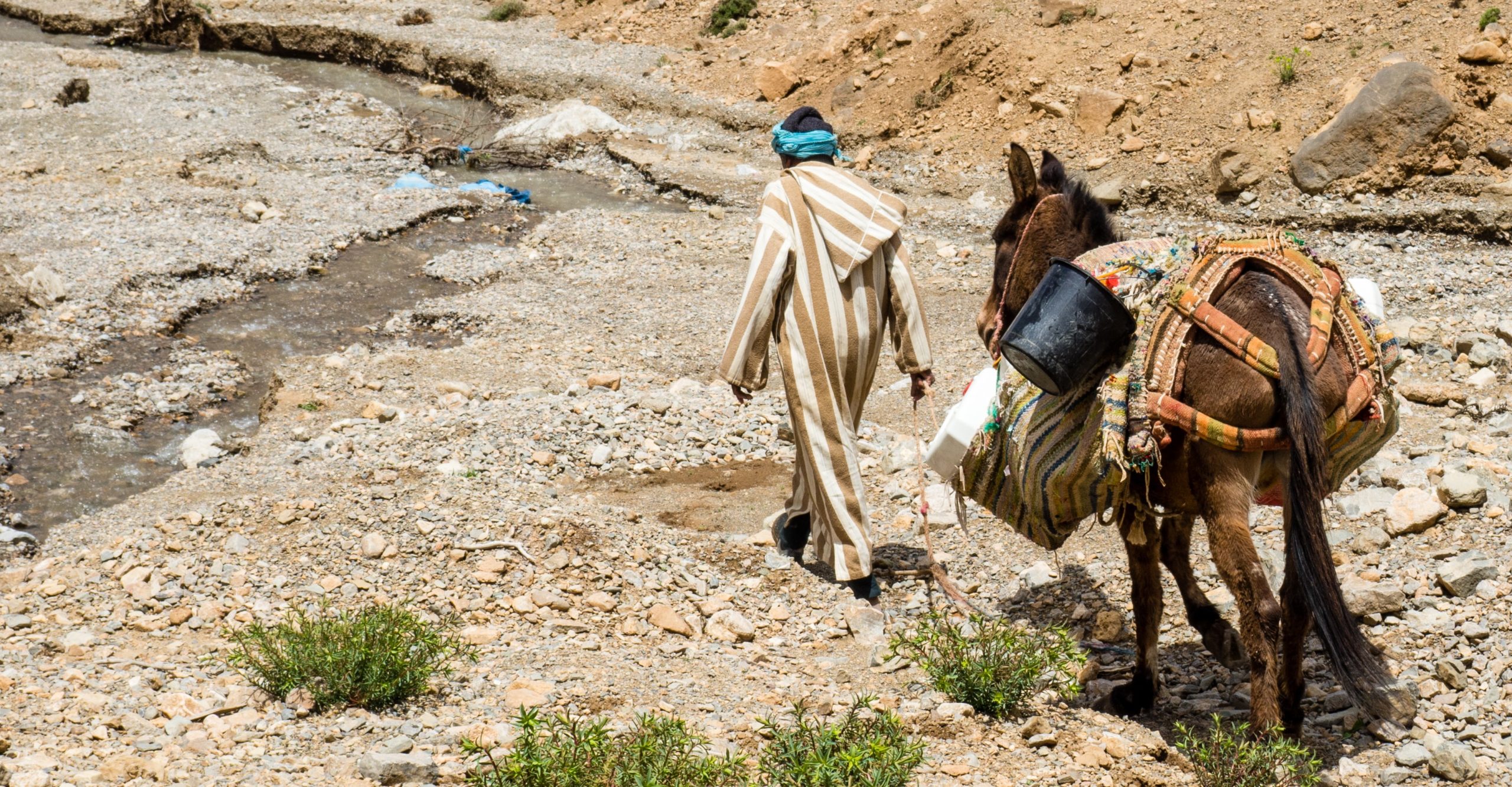 Four Horsemen are No Match for One Mounted on a Donkey

“Nothing says Palm Sunday quite like the fourth rider of the apocalypse.” So wrote a Facebook friend when I posted the text of Revelation 6:7-8 to social media several weeks ago on the day when we celebrate Jesus’ triumphal entry into Jerusalem.

In the midst of the COVID-19 pandemic, our church had scheduled community groups to meet by Zoom in lieu of the usual once-a-month evening worship gathering that complements our weekly morning worship, and I had been asked to prepare a brief, comforting, encouraging reflection on any passage of Scripture.

As I thought about it, it didn’t take long for Revelation 6 to hit me. Along with a cry of those martyred for their faith — “How long?” — Revelation 6 includes the first series of judgments symbolized in the book, and the first eight verses focus on the infamous four riders or Horsemen of the Apocalypse. The first rider symbolizes conquest and domination, the second violence, the third economic distress, and the fourth the ravages of nature, such as famine and disease.

Verses 7-8 were just short enough for a quick post: “When he opened the fourth seal, I heard the voice of the fourth living creature say, ‘Come!’ And I looked, and behold, a pale horse! And its rider’s name was Death, and Hades followed him. They were given authority over a fourth of the earth, to kill with sword and with famine and with pestilence and by wild beasts of the earth.” Of course, “pestilence” was the word that had spurred me to pull together a meditation on this particular passage during the pandemic. It seemed to fit the moment, but my friend didn’t see the encouragement in it.

It’s possible my friend was joking, but I wouldn’t blame him for thinking the passage was ill-suited to the occasion. In the midst of the uncertainty and disruption of the pandemic, why post verses that feature the destructive power of two great enemies of God and His people? On Palm Sunday, why choose verses that, on their face, seem to emphasize the authority these enemies were given? Sure, it’s normal to talk about a rider on Palm Sunday, but one “humble, and mounted on a donkey, on a colt, the foal of a beast of burden” (Matthew 21:5). Weren’t these the wrong riders? Like all of Scripture, Revelation 6 is important, but choosing it for Palm Sunday may have felt a bit like choosing Matthew 2:16-18 for Christmas — the Massacre of the Innocents has its own day.

Nevertheless, I found Revelation 6, especially the first eight verses, encouraging in the face of the pandemic. More than that, I thought it had a nice Palm Sunday ring to it. If we see the way that it fits with John’s throne-room vision in Chapters 4 and 5, if we comprehend how it relates to symbols of God’s work to preserve, protect, and prepare His church in Chapter 7, and if we understand the first five verses of Chapter 8, we can see the ultimate point of this passage and discover in it an encouraging message about God’s sovereignty, God’s providence, and prayer. We can see how new meaning — and, indeed, ultimate meaning — is given to suffering and death not by the brash riders of Revelation 6, but by the meek rider of Matthew 21.

Reading Revelation 6 in the context of Chapters 4-5 reminds us of God’s sovereignty in the midst of suffering.

Indeed, it is God’s sovereignty that comes into focus first when we put Revelation 6 into the broader context that begins with John’s throne-room vision. In Revelation 4:1, a voice “like a trumpet” promises to show John “what must take place after this.” John sees 24 elders and four living creatures worshipping one who is seated on a throne and holding a sealed scroll. At first, John begins to despair that no one will be found worthy to open the scroll. Then he hears that “the Lion of the tribe of Judah … has conquered” and is worthy to unseal it, but when he looks, he sees a lamb standing, as though it had been slain. The Lion of the tribe of Judah, who is the conquering King, is the slaughtered Lamb of God.

John’s first readers or hearers would have understood this to mean that the crucified Jesus, the slain final sacrifice, is the risen King. We might imagine they were encouraged by this, but they might also have been baffled. They might have asked questions such as, “If our God is on the throne, and if our risen Lord is seated, victoriously, beside Him, then why do we continue to see oppression, persecution, and suffering in the world?” They might even have doubted, however sheepishly: “It sure doesn’t look like Jesus is already on the throne, to us.”

Likewise, we might ask, “If John is telling us that Jesus is truly on the throne, then why do we live with scourge of COVID-19, as it ravages our communities, undermines economic vitality, and even disrupts our patterns of corporate worship? It sure doesn’t look like Jesus is already on the throne, to us.” If that is a question raised by a vision of God on the throne, then Revelation 6 holds part of the answer, making it clear that God is in control even of the difficulties that ravage His creation and threaten His people.

The riders come when God’s messengers command it, and those riders are “given authority” — they have none of their own — to bring destruction that fulfills various curses and prophecies of the Old Testament. So for readers tempted to see the chaos around them as evidence either that no one is in charge or evil reigns, Revelation 6, especially in its broader context, comes as a reminder that the slain Lamb is in charge. God is sovereign even over the pestilence that ravages our communities, even over the economic distress that comes with it, and even over the waiting before normal practices of corporate worship can be restored. Things are not the way they will one day be, but God is still in control.

Reading Revelation 6 in the context of Revelation 7 comforts us with images of God preserving, providing for, and preparing His people in the midst of suffering.

After the living creatures call forth each of the four riders, two seals remain in Chapter 6. At the unsealing of the fifth seal, those “slain for the word of God and for the witness they had borne” cry out for justice, and with the sixth seal come symbols of God’s judgment on corrupt earthly authorities. Immediately following, though, beginning in Chapter 7, God’s messengers are shown restraining calamity while another angel instructs them not to allow any harm until God’s people are prepared: “After this I saw four angels standing at the four corners of the earth, holding back the four winds of the earth, that no wind might blow in the earth or sea or against any tree. Then I saw another angel ascending from the rising of the sun, with the seal of the living God, and he called with a loud voice to the four angels who had been given power to harm earth and sea, saying, ‘Do not harm the earth or the sea or the trees, until we have sealed the servants of our God on their foreheads.’”

John hears the number of the sealed — 12,000 apiece from each of 12 tribes of Israel — which New Testament scholar Richard Bauckham recognizes as a military census. Then he looks and sees that this same group is a multiethnic multitude of worshippers. In other words, while God is preserving His creation against calamity, He is preparing His people as a global spiritual army. It is not that God’s people are protected from all physical harm, but it is that God restrains calamity while calling and equipping His people spiritually. Lest we lose sight of what it means to be spiritually equipped, to be made new, it means to be delivered not only from the consequences of sin, but to be delivered from bondage to it, to be empowered by the Holy Spirit for selfless, Christlike love of God and to neighbor. It is the army of the slain Lamb, after all. So when we wonder what God is doing in the midst of the COVID-19 pandemic or any other calamity, we can be sure that He is preserving, preparing, and providing for an army of witnesses who proclaim His name and follow His Son by the power of His spirit.

Reading Revelation 6 in light of Revelation 8:1-5 reminds us of the power of prayer.

With the opening of the seventh seal, this section of the book reaches its apex not with the riders, but with one of the most memorable images of prayer in all of Scripture. A brief silence follows the unsealing, and then John sees seven angels given seven trumpets, the sounding of which will punctuate the symbolism of the book’s next section. But before any trumpets are blown, before John sees the next symbols of God’s judgment and deliverance, another messenger of God steps forth. The angel stands at the altar and mixes together incense and the prayers of the saints in a golden censer. John sees the smoke from the censer rise before God, and “Then the angel took the censer and filled it with fire from the altar and threw it on the earth, and there were peals of thunder, rumblings, flashes of lightning, and an earthquake.”

The image is one of God’s messenger taking the prayers of the faithful, hurling them over the walls of the heavenly city, and watching them plummet to earth, where they accomplish God’s will — symbolized by Old Testament symbols of God’s ultimate authority — in dramatic fashion. It’s an answer to the third petition of the Lord’s Prayer. It’s an answer to the martyrs righteously impatient for judgment. How long? How about now? When we wonder how long suffering may last, how long we must endure, how long our communities and congregations may be in distress, when we earnestly inquire of God how long He will let this pass and when we intercede on behalf of our people and their communities, we can be confident that those prayers, having reached God, return with the force of a censer hurled down by an angel to do God’s will on earth.

So when we wonder how to think about the scourge of COVID-19, Revelation 6 — especially in its broader context — reminds us that God is in control, that God is preserving, providing for, and preparing His people in the midst of suffering, and that prayer is one of God’s ordained means of bringing about His will on earth. We must also remember that the story of God’s dealings with the world — His judgments, His mercies — is the story unsealed by the slain Lamb, the one who conquered death by dying, and this gives all of history, including our present suffering, its true meaning and significance. Even the Fourth Rider of the Apocalypse, and the pestilence he brings, must submit to the rider who makes His triumphal entry meekly and lowly, riding on a donkey.